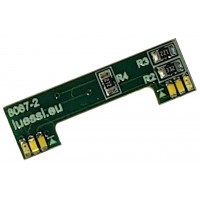 The 8087-2 light module was developed for Märklin locomotives of the Re 460 series, which are alread..