The 8087-2 light module was developed for Märklin locomotives of the Re 460 series, which are already equipped with LEDs.
Many of these models were equipped with yellow LEDs back then. With this circuit board they can be converted to white LEDs.
In addition this pcb has two more white LEDs for high beam and two red LEDs as tail lights in the lower left and right corner.

This light module differs from item 8087 by two red LEDs at the bottom left and right. 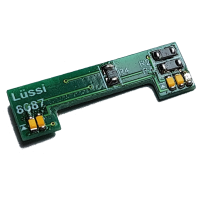 The 8087 light module was developed for Märklin locomotives of the Re 460 series, which are already ..