The 8088 light module has been specially developed for Märklin locomotives of the series Ae 8/14, which are still equipped with yellow LEDs. It also adds a red tail light to these locomotives.
Swiss light change with a white lamp at the bottom right is also possible.
The module fits exactly on the place where the previous light module was placed and is plugged in there.

All LEDs are led over series resistors on the module, so that the connectors can be wired directly to the decoder outputs. 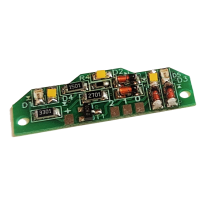 The 8084 light module has been specially developed for Märklin locomotives of the Re 4/4 series. It ..